I got my usually-lazy self out of bed at 3:30 am on Sunday, December 28th to go birding. At first I was planning on heading down to Fairhaven and exploring that area, but that just didn't quite fit my mood somehow. I craved a more familiar background that morning. So I decided to go to Plum Island and Parker River NWR, a fantastic place. 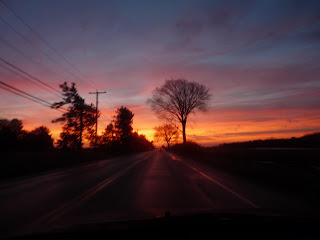 I hit the road and the closer I got to Plum Island, the brighter the sky became. I felt like we were in sync at some moments, and at others I felt like we were racing one another. I pulled in to the first parking area at dawn, and immediately noticed a group of birders gathered there. (They were clearly birders, everyone had a pair of binoculars around their necks, there were a few scopes around, and anytime something soared overhead, they'd watch it, and raise the binoculars if it looked interesting.) I just kind of got my things together, reorganizing them into the proper places in my backpack and what-not, stalling just a bit and waiting for the group to disperse so I could ask one of them if they were here for a CBC. 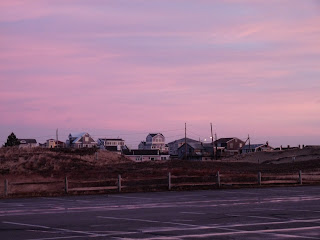 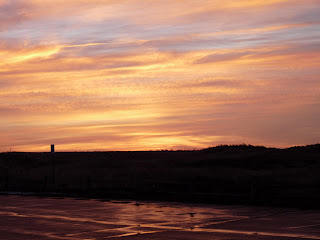 The group dispersed, and one man walked toward the car parked next to mine, I asked if they were doing a CBC, and he cheerfully replied "Yup! This is the Newburyport CBC!" I was delighted, told him I was an amateur birder, and excitedly accepted the invitation to join in and tag along. The man (Tim, I'm almost positive. I'm awful with names.) introduced me to the CBC coordinator, and said I could tag along with his section. I followed Tim in our respective cars to lot 5, where we met up with another birder (I'm embarrassed to say I can't remember his name!).

We set off down the road towards the end of the island (the road was closed to cars). After a little while the guys spotted a red-breasted nuthatch (we'd seen and recorded several other birds before the nuthatch, it's just that it was the first really exciting bird for me) and I confessed that I'd only seen white-breasted nuthatches before. Upon hearing this, they both made an effort to help me get a good look at the bird (they could both identify it by it's call quite easily, it seemed). I ended up spazzing out (autofocus is not very useful when a bird is hidden in a thicket, and I took forever to switch the camera to manual focus) and not getting a picture of the nuthatch, but I did get a good look at it. I prefer to get a picture of new birds (well, really of most birds I see when I go birding) but I was alright with missing it. Hadn't even been birding for an hour and I had a new lifer!

Now, I've read and heard before that one really great thing you can do to improve your birding skills overall is to go birding with advanced birders. It's not that I didn't believe this, I just never really had the opportunity to do it before that day. And let me tell you--definitely true. That first couple of hours I just kind of admired the skills both Tim and (gosh! I hate that I can't remember his name! If he was a jerk I might not care as much, but they were both such nice guys!) had. Any little speck that appeared on the horizon, they seemed to see it instantly, as if they had extended-peripheral vision. Two seconds later they had it identified, or at the very least narrowed down to two or three possibilities.

I learned a lot from birding with those two that morning, and I'm proud to say I even sort of contributed to the count. I saw about 7 or 8 lifers that day (honestly, I started losing track). They were pointing out some Buffleheads to me a ways away (since I said it would be a new bird for me), and then (as I remember it, anyway) they looked back to something else. When the buffleheads were initially pointed out, the guys recorded it as 4 on the list, but I kept watching them, and a couple more appeared (I assume those 2 had been diving when we first saw the group). I spoke up, the guys looked, and chalked up another two buffleheads on our list. Not big, I know, but I'm a silly little amateur birder, and I contributed, dammit!

A little later I spotted something soaring over a hilltop while the guys had their binoculars pointed in another direction. I wasn't sure if it was a gull or a raptor, couldn't quite see the wing shape, but it was soaring, so I spoke up. "Is that a gull or.....?" The guys looked in it's direction and decided it was a rough-legged hawk. I believe I got a "nice job" from them, and definitely felt a twinge of pride.

I guess it's a like the beginning of a relationship with someone, when the first time you cuddle, or kiss, is just so mind-blowingly exciting (for me and the other ladies I've talked to, anyway. Maybe I'm still just very young, and maybe guys don't feel the same way at all, I don't know). Any progress I make with my birding is thrilling, even when it might not be a big deal to an advanced birder. For me at this point, there's just so much that's still new for me.

I feel like I've blabbered on enough about this now, and I don't even know if anybody's actually reading my silly blog, so I'll wrap it up. That day I saw several lifers, including:
Red-breasted Nuthatch
Rough-legged Hawk
Bufflehead
Hooded Merganser
Red-throated Loon
Northern Shrike
Horned Lark

And, of course, I forgot to transfer my pictures from my brother's laptop to my new harddrive (got my lappy back from the shop on new year's eve). So now my pictures are 7 hours away, until he sends them to me. Oh well.
Posted by birdsonthebrain at 13:42

Places to go Birding in NY

Places to go Birding in MA